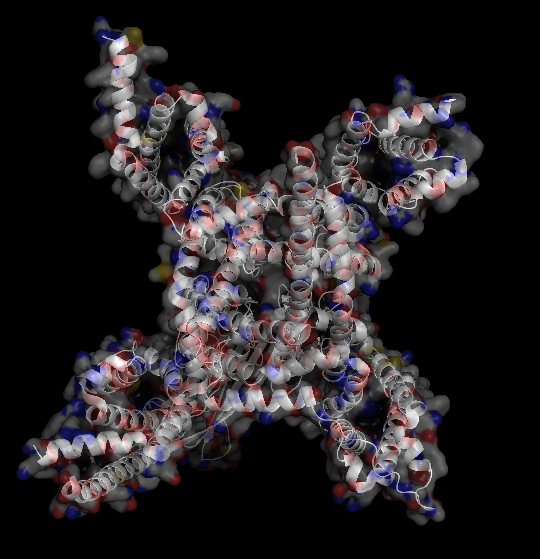 Today's Molecule of the Week is the voltage-gated sodium channel from Electrophorus electricus - more commonly known as the electric eel. This sodium channel controls the flow of sodium ions into and out of the cell across the ion gradient. When the electric eel decides to trigger a shock, it releases a neurochemical that opens the voltage-gate's sodium channels in all its electrocyctes - its electricity producing cells. The normal gradient in the cell membrane of the electrocytes is flipped when the sodium channels all open at once, allowing sodium to flood in. An asymmetric division of the electrocyte membrane means that this can form an action potential across the membrane. The many electrocytes in an electric eel all working together can create potentials as powerful as 600 volts! 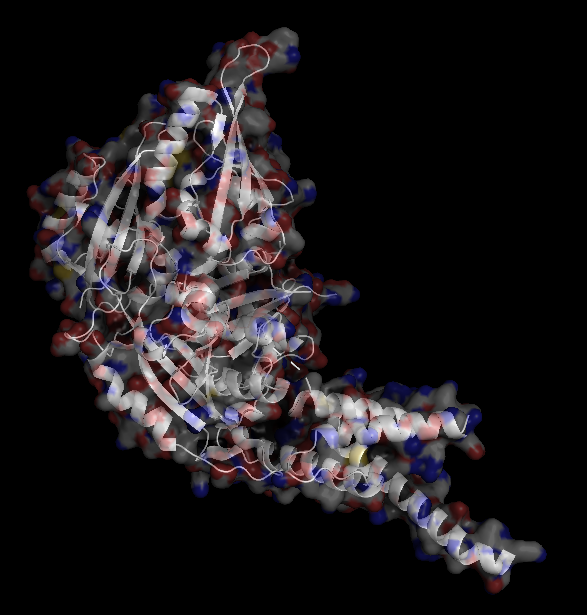 Have you ever wondered how humans’ function on a 24-hour schedule? You may think that sunlight is what guides our daily processes like sleep and cell metabolism. However, humans and most other living beings have what’s called a circadian rhythm that governs our 24-hour cycle. The main force behind this rhythm is a protein called CLOCK:BMAL1 transcriptional activator complex (PDB ID: 4F3L). This is a combination of a transcription factor protein and another protein which activates the factor. A transcription factor can regulate genes, preventing the first step of protein production - RNA transcription. This means that the “clock” complex can regulate protein production, affecting processes like immune responses, heart rate, and melatonin production to help with sleep. While external factors like sunlight and caffeine can modify our circadian rhythm, it’s really our “clock” proteins that help us wake up in the morning. 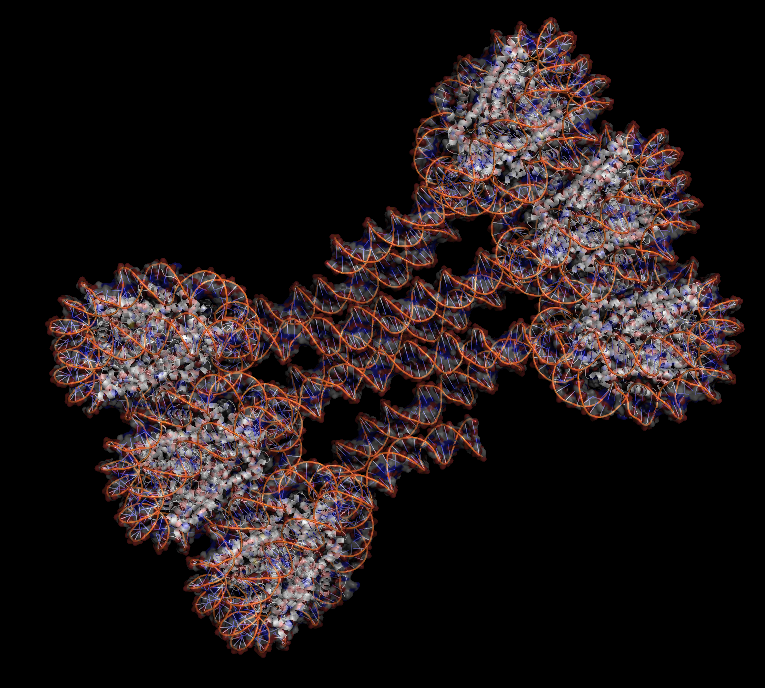 Most people have a pretty good idea of what DNA looks like: two long strands coiled around each other, like two lengths of twisted rope. Generally, people also have a mental image of chromosomes – something like the letter X, with arms lazily slouching in rows of similar pairs. But if chromosomes are made of DNA, why are their shapes so different? As it turns out, chromosomes don’t just consist of DNA, but are made up of a material called “chromatin”. In addition to DNA, a major component of chromatin is a type of protein called a histone. These proteins help package DNA molecules into an ultra-compact form that is less likely to get tangled or break. For comparison, the DNA in human Chromosome 1 is consists of approximately 250 million base pairs, giving it a fully-unwound length of about 8.5cm– approximately the diameter of an apple. Compacted into a chromosome, it is closer to 0.00085cm fully outstretched – close to the width of a strand of spider silk. On a cellular scale, this is still HUGE, and without histones to keep our DNA stable and tightly wound, the size of our genome might be completely unsustainable! This image (PDB 6HKT) shows one DNA molecule wound around an array of six histones. Chromosomes consist of countless multiples of this structure, repeated thousands and thousands of times, and coiled in on themselves to form the neat “X” shapes with which we are all familiar. 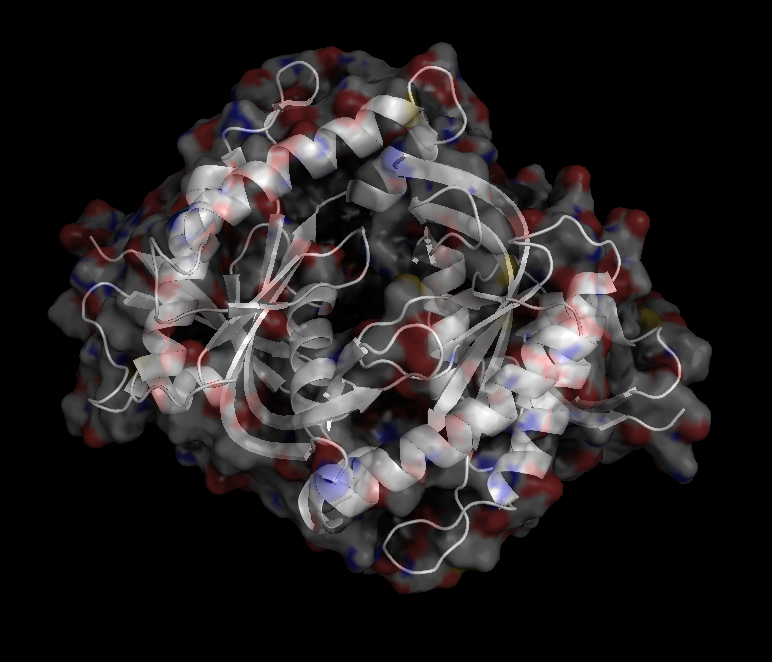 The human eye contains approximately 6-7 million cone cells. These cone cells mark the beginning of the pathway that allows us to convert frequencies of light to perceived color. Light acts as an oscillating wave - like ripples in water. Each cone cell contains one of three different types of photoreceptors that are activated depending on the wavelength of incoming light. Like a domino effect, the receptors on these cones set off a series of chemical reactions that sends the light signal to the brain. One of these "dominos" is the protein guanylate cyclase (shown here, PDB ID: 4NI2). At high calcium concentrations, the protein complex formed by guanylate cyclase is disassociated, putting it in a primed state, ready to play its part in receiving and relaying the message. In many colorblind individuals, a mutation in guanylate cyclase causes the protein to dimerize at higher calcium concentration levels. The protein is incapable of existing in its primed state. Since the formation of guanylate cyclase also causes a downstream influx of calcium into the cell, calcium levels in the cell can reach high enough levels to stimulate death of the cone cell. These dead or desensitized cells are the cause of the most common form of color blindness. 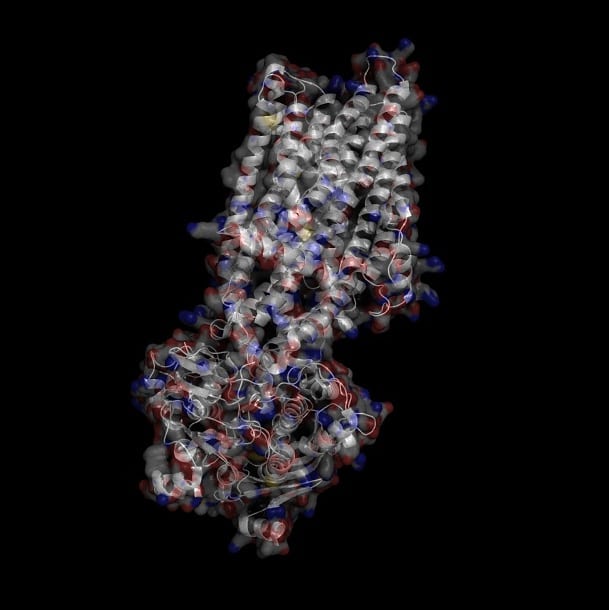 Cystic Fibrosis (CF) is a genetic disease affecting more than 30,000 Americans and 70,000 people worldwide. Individuals suffering from CF have a mutated copy of the cystic fibrosis transmembrane conductance regulator (CFTR) gene from each parent. The most common mutation among the CF population is a deletion of the phenylalanine residue at position 508, which causes misfolding and faster protein degradation. The CFTR protein (PDBID: 5UAK) is composed of 5 structural domains: two transmembrane domains, two cytoplasmic nucleotide-binding domains, and one regulatory domain. This protein utilizes ATP hydrolysis to transport chloride anions down the electrochemical gradient. The channel opens when ATP binds and closes when ATP is being hydrolyzed. The regulatory domain must be phosphorylated to allow the opening of the channel. When chloride is unable to reach the cell surface due to a dysfunctional CFTR, water is not attracted to the surface and mucus becomes thick and sticky in the lungs, pancreas, and liver. The mucus accumulates, resulting in clogged airways, held digestive enzymes, and duct blockages that lead to inflammation, infection, malnutrition and respiratory failure. Molinski, Steven V., et al. "Comprehensive Mapping of Cystic Fibrosis Mutations to CFTR Protein Identifies Mutation Clusters and Molecular Docking Predicts Corrector Binding Site."Proteins: Structure, Function, and Bioinformatics, vol. 86, no. 8, 2018, pp. 833-843. Liu, Fangyu, et al. "Molecular Structure of the Human CFTR Ion Channel." Cell, vol. 169, no. 1, 2017, pp. 85-95.e8. 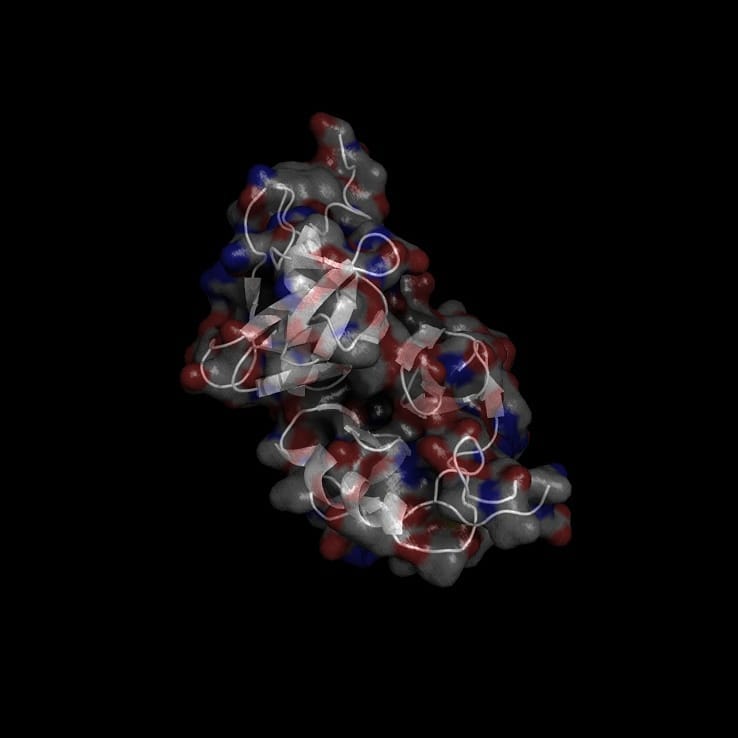 Our MOTW of the week last August discussed oxytocin and its restorative properties (http://ow.ly/1PJ750vojNG). We're bringing it up again to examine the hormone’s use between a dog and its owner. Historically, it is understood that humans domesticated dogs but, chemically speaking the domestication was mutual. The effect of the dog’s domestication on humans lies in "puppy-dog eyes". One of the major forms of human communication and affection is through gaze. Whether it's a mother gazing at her infant or partners gazing into each other’s eyes, their eye contact releases the “hormone of love” oxytocin (PDB ID: 1NPO) which further deepens bonds of affection and trust. As humans and dogs co-evolved, canines adapted to use this form of communication - allowing them to gain the affection and trust of humans. This, in turn, gave dogs a species-long benefactor. [1] Kim, S., Fonagy, P., Koos, O., Dorsett, K., & Strathearn, L. (2014). Maternal oxytocin response predicts mother-to-infant gaze. Brain Research, 1580, 133–142. http://ow.ly/bBa350vojNE [2] Ross, H. E., & Young, L. J. (2009, October). Oxytocin and the neural mechanisms regulating social cognition and affiliative behavior. Frontiers in Neuroendocrinology. http://ow.ly/wGPa50vojNF [3] Nagasawa, M., Mitsui, S., En, S., Ohtani, N., Ohta, M., Sakuma, Y., … Kikusui, T. (2015). Oxytocin-gaze positive loop and the coevolution of human-dog bonds. Science, 348(6232), 333–336. http://ow.ly/v8Q850vojNH 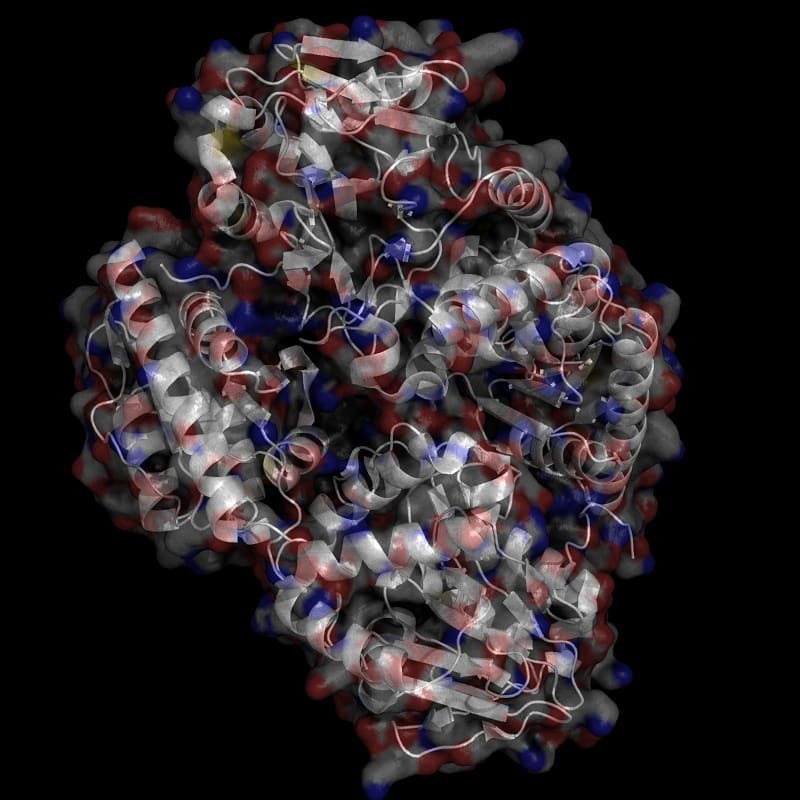 Giardiasis is a disease caused by the microorganism Giardia lamblia. Also known as beaver fever, Giardia cysts are commonly found on surfaces, soil, food, or water that has been contaminated with feces from infected humans or animals. Due to their protective outer shells, Giardia cysts can live outside of the body for long periods of time. The molecule shown here is a flavodiiron protein found in the parasite (PDB ID 2Q9U). The protein is believed to help keep Giardia alive by reacting with O2 molecules and producing H2O. Next time you're camping and find a stream, boil the water (or disinfect it in some way) before drinking it! 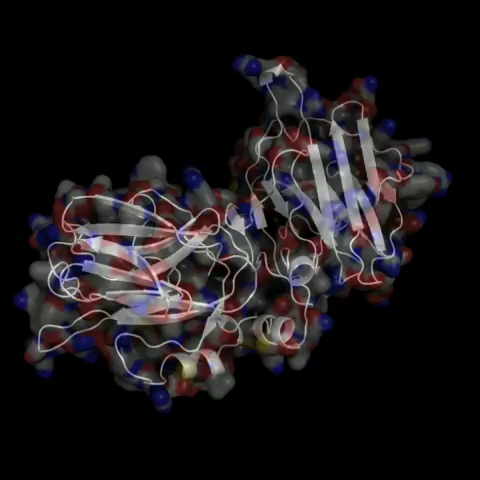 The unique, captivating universe of Pokémon never ceases to astonish people. The adorable Pokémon have been a long-time staple in Japanese media that has given rise to many movies and games. This is why The Department of Developmental Biology at the Osaka Bioscience Institute named a newly discovered protein as “Pikachurin” - after the most popular Pokemon on the show. This protein is an extracellular, matrix-like protein that is found in the synaptic cleft of photoreceptors. It helps produce synapses in the retina and affects synaptogenesis between the photoreceptor and bipolar cells. It transmits neural signals to decipher images within the brain. Without any Pikachurin the central nervous system would not function correctly. Knockout of the gene that produces Pikachurin is linked to congenital muscular dystrophies. The image here was homology modeled using the sequence of Homo sapien Pikachurin. 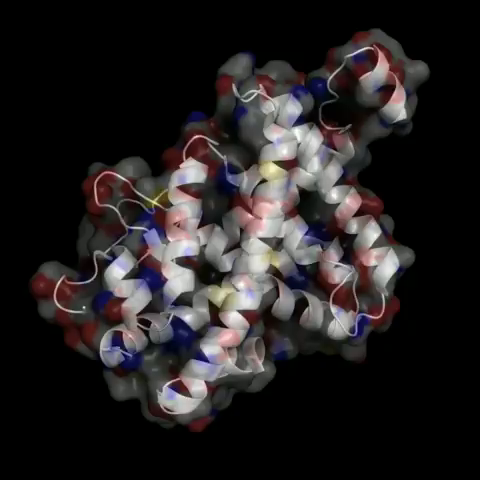 Hypothyroidism, or underactive thyroid, is a disorder where the thyroid gland does not produce enough triiodothyronine (T3) and thyroxine (T4) which are thyroid hormones responsible for the regulation of metabolic processes. Underactive thyroid can lead to a slow heart rate, increased blood pressure, and hardening of the arteries. A notable non-cardiac symptom is muscle aches - something you don’t need a medical test to realize. Hypothyroidism is treatable by use of synthetic hormones. Pictured is synthetic T4 known as levothyroxine (PDB ID: 1ZXZ). About 10-30% of T4 is converted to T3 by our bodies which is key for proper thyroid function and all systems that depend on it. Brix, Klaudia et al. “Molecules important for thyroid hormone synthesis and action - known facts and future perspectives.” Thyroid research vol. 4 Suppl 1,Suppl 1 S9. 3 Aug. 2011, doi:10.1186/1756-6614-4-S1-S9 Colucci, Philippe et al. “A Review of the Pharmacokinetics of Levothyroxine for the Treatment of Hypothyroidism.” European endocrinology vol. 9,1 (2013): 40-47. doi:10.17925/EE.2013.09.01.40 Kostoglou-Athanassiou, I, and K Ntalles. “Hypothyroidism - new aspects of an old disease.” Hippokratia vol. 14,2 (2010): 82-7. 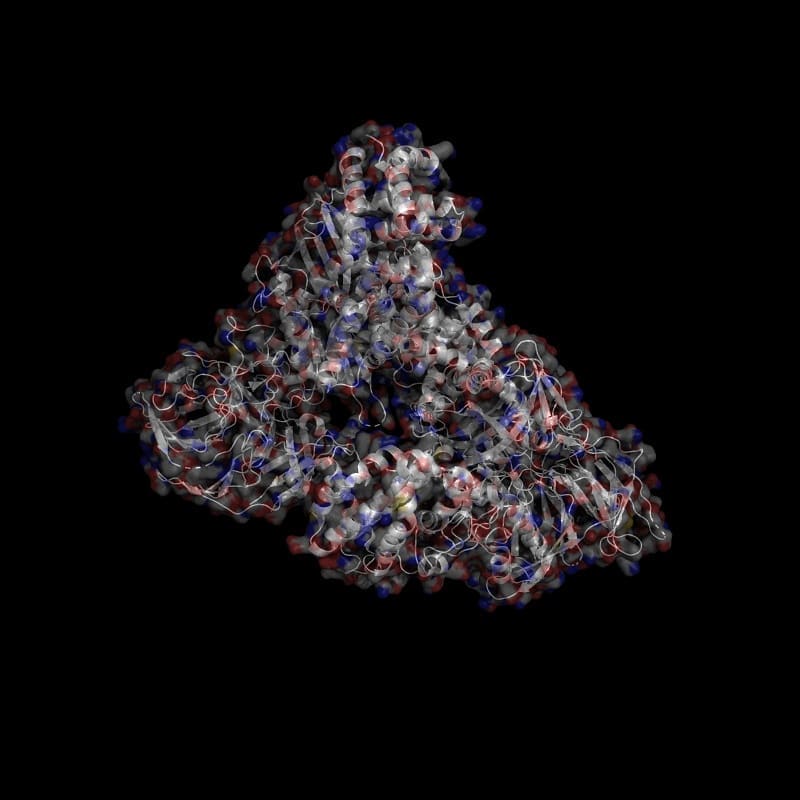 Ever wonder how your body deals with so many different infections? The answer is Recombination Activating Gene 1 (RAG1)! RAG1 can rearrange and recombine the genes of T cell receptors (receptors responsible for recognizing antigen fragments) and immunoglobulin molecules (antibodies) – giving them the ability to recognize virtually any antigen in existence! RAG1 has a diverse set of special proteins on its surface that can detect when foreign invaders enter your system. It detects these invaders by going through a process called DNA rearrangement. This process is repeated multiple times in many areas in order to increase the variability of the resultant protein created. Due to the variety of sequences that are created through this process, it’s statistically likely that some of the sequences will bind to the invader. Thus, the body’s ability to fight infections becomes much more efficient. This gene is what makes the human immune system so versatile! Pictured here is PDB 4WWX - the crystal structure of V(D)J recombinase RAG1-RAG2.