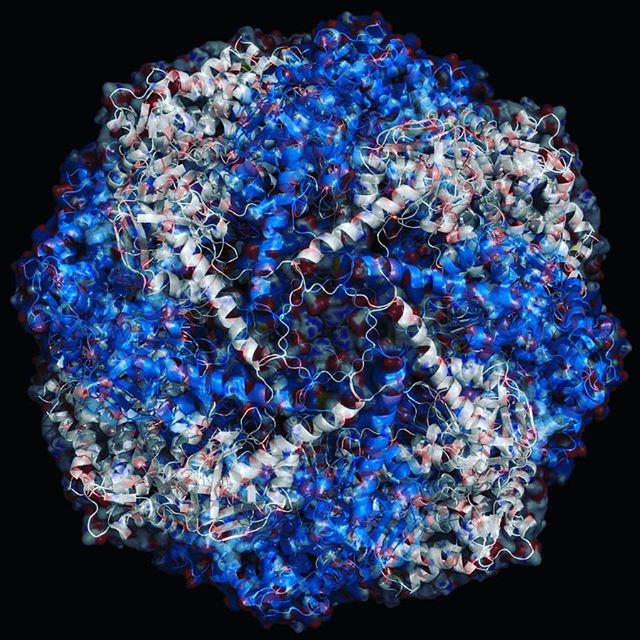 The beautifully symmetrical protein you see here (PDB ID: 1A6D) is Thermosome Chaperonin I found in the archaea Thermoplasma acidophilum. This organism is known as an extremophile - a creature that lives in conditions of extreme temperature, acidity, alkalinity, and/or pressure. Thermoplasma acidophilum, in particular, thrives in temperatures around 56°C (133°F) and a pH of 1.8. This is equivalent to hot gastric acid! However, they don't reside in our stomachs, preferring rather to live in volcanic steam vents called solfataras where hydrogen sulphide gases mix with water at the surface and produce a comfortable bath... for them, not you! 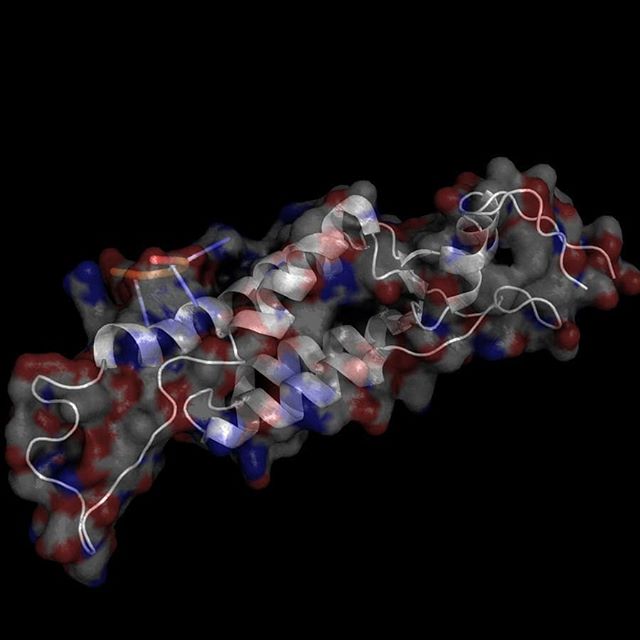 In the midst of the COVID-19 pandemic, it is interesting to learn about how we discovered viruses from an unexpected place - a few tobacco plants. In 1892, the scientist Dmitri Ivanovski published a paper detailing that tobacco leaves began to discolor, like a mosaic, and then die from a mysterious disease. He extracted the sap of infected plants, then pushed it through filters too small for bacteria to flow through. Next, he coated a healthy tobacco plant with the filtered sap and found the plant still become infected. Ivanoski concluded incorrectly that there must have been a very small bacteria that was the cause. However, another scientist reached a different conclusion. In 1898, Martinus Beijerinck did a similar experiment but concluded that this was neither a bacterium nor a fungus. He concluded that there was new class of disease agent called a “Virus”. The disease was dubbed the Tobacco Mosaic Virus (TMV) and created the new field of study, virology. From a century of research, we have advanced understanding of viruses and today we can rapidly develop possible life-saving vaccines through computational biology. 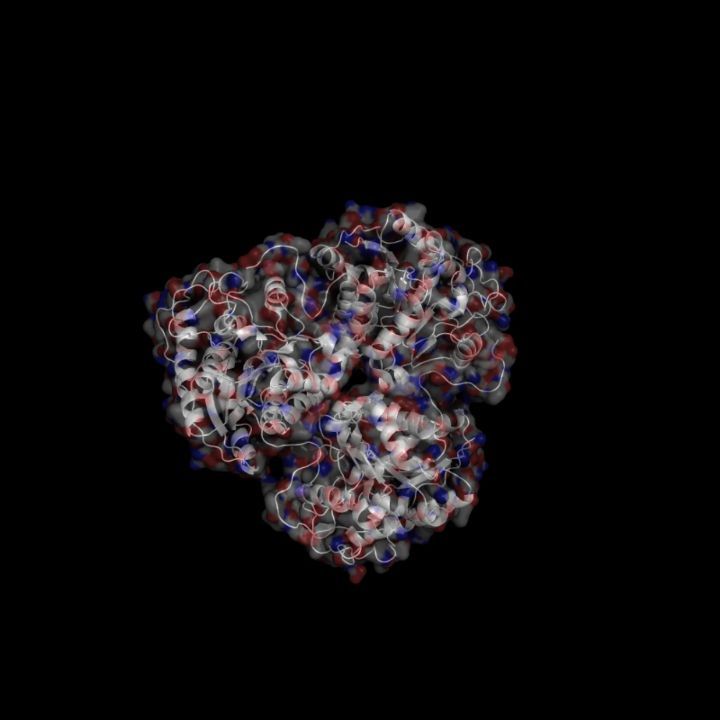 Arginase I (shown here, PDB ID: 2PHA) is an enzyme that is found in the liver and responsible for the final step of the urea cycle - how humans dispose of ammonia in the body. Specifically, it converts L-arginine, an amino acid, into L-ornithine and urea. Arginase I deficiency is the cause of Argininemia, an autosomal recessive disorder in which ammonia levels build up in the blood. Fortunately, it can be treated by a low-protein diet and a number of medications. 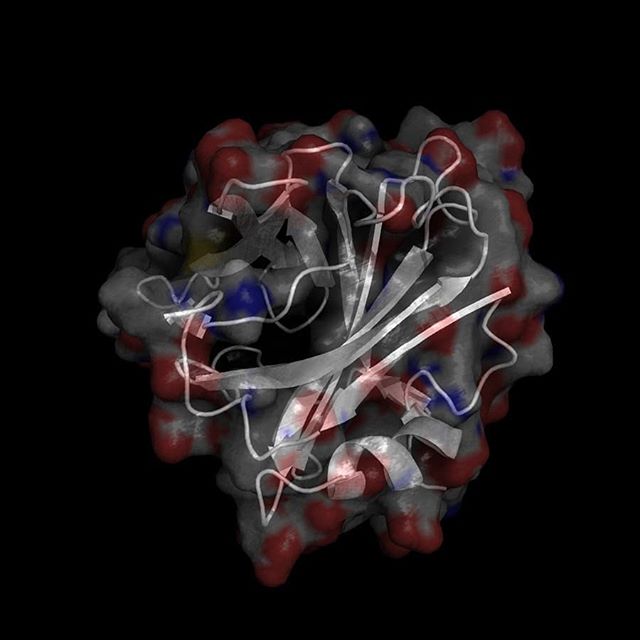 Cow’s milk allergy is the most common allergy that humans have, with 2.5% of the population having it. It usually appears in children less than six months of age. It is important to note that cow’s milk allergy differs from lactose intolerance. This is because lactose intolerance comes from lactase enzyme beta-galactosidase not being able to break-up all the glucose and galactose. Which then is held in the colon and ferments and is why adverse effects occur. Cow’s milk allergy is when an IgE antibody binds to cow’s milk proteins and triggers the release of mediators, such as histamine, prostaglandins, and leukotrienes causing an allergic reaction. The most common cow’s milk proteins are beta-lactoglobulin (BLG pictured), alpha-lactalbumin (ALA), and casein which comprises four proteins coded by different genes carried on the same chromosome: alpas1-caseins, alphas2-caseins, beta-caseins, and kappa-caseins. 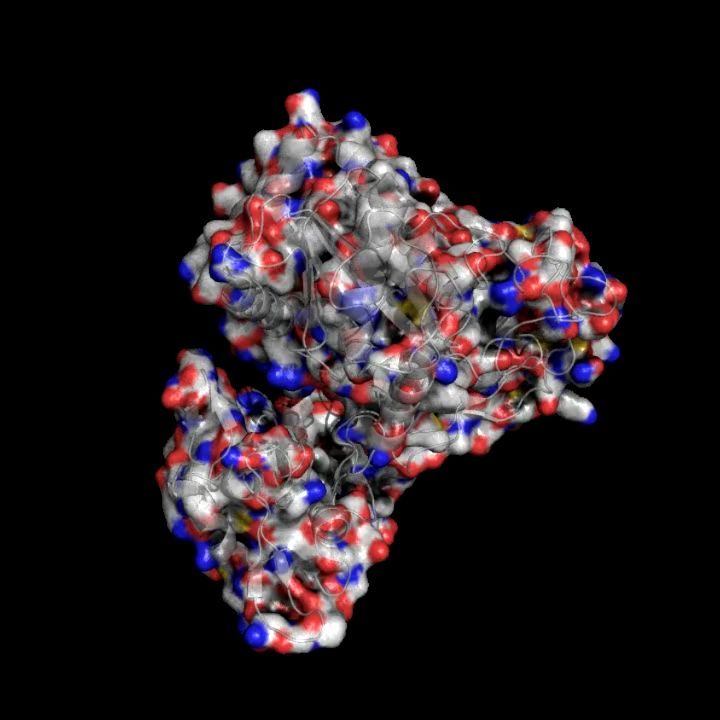 Crotalus atrox, commonly known as the Texas diamondback rattlesnake, is one of the most dangerous snakes in North America. Untreated bites from C. atrox have a mortality rate of up to 1 in 5, and the species is responsible for a large percentage of the roughly 8,000 venomous snake bites that occur in the US each year. Though its venom is considered to be less toxic than that of most other rattlesnakes, its specialized fangs allow it to deliver much more venom per bite. Like other rattlesnakes, its venom contains several enzymes capable of disabling and destroying other proteins, especially in the bloodstream. Pictured is the enzyme VAP2, a metalloprotease which uses a metallic zinc ion to cleave and disassemble proteins in the target of the bite. The destruction of cellular components by VAP2 is partly responsible for the internal hemorrhaging sometimes caused by rattlesnake bites. 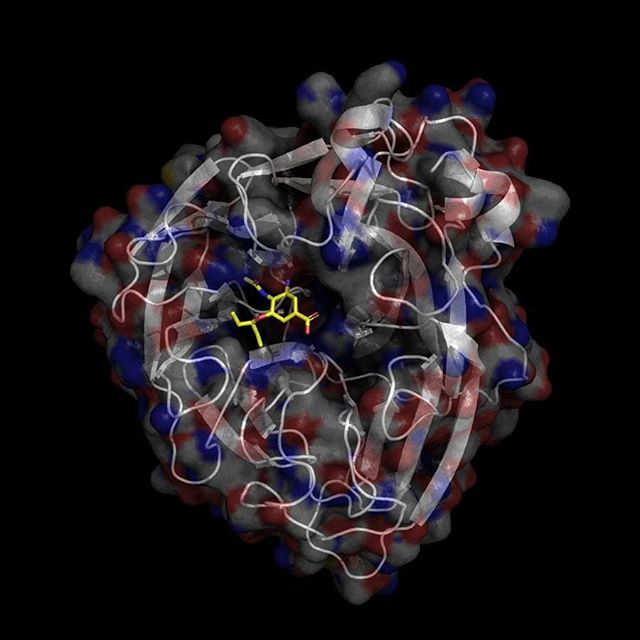 We are in the midst of flu season, and while most viruses have no known medications, we have made progress in the cases of Influenza A and B. Oseltamivir - commonly known as Tamiflu - is a medicine that can be taken during the first 48 hours of getting the flu and acts to fight the virus. It works by blocking neuroaminidases on viral surfaces, which in turn stops the release of virions from an infected host cell. Shown here in yellow (PDB ID: 4HZX) is Oseltamavir which slows the spread of the flu if taken early on. It should not be taken as an alternative to vaccinations, so it's still a good idea to go get that flu shot! 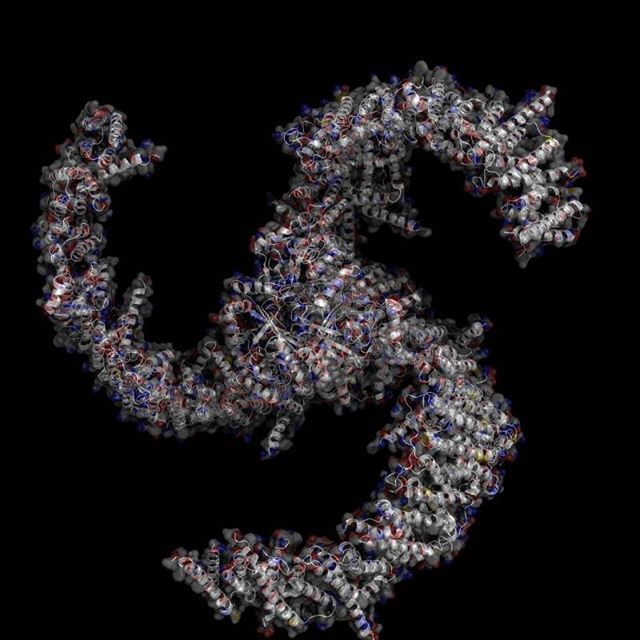 Could you imagine completely losing the sensation of touch? Imagine your skin meeting a nearby surface yet having no awareness of it. It's probably near impossible to imagine the kind of havoc this would wreak upon our daily lives. If we were to follow the chain reaction that turns the contact of a surface against our skin into conscious awareness of that surface, we would stumble upon a class of proteins called mechanosensitive ion channels (and we would arrive there quite early in the process too). As the name implies, these channel proteins are sensitive to mechanical stimulus - such as changes in tension upon a surface. The specific mechanosensitive ion channel shown is called Piezo2 (PDB ID: 6KG7). It is embeded within the transmembrane, where changes in tension of the membrane opens the channel and allows the influx of ions across the membrane. This activity transforms the mechanical stimulation into electrical activity, which ultimately makes it to the brain - where the surface can be brought to our awareness. 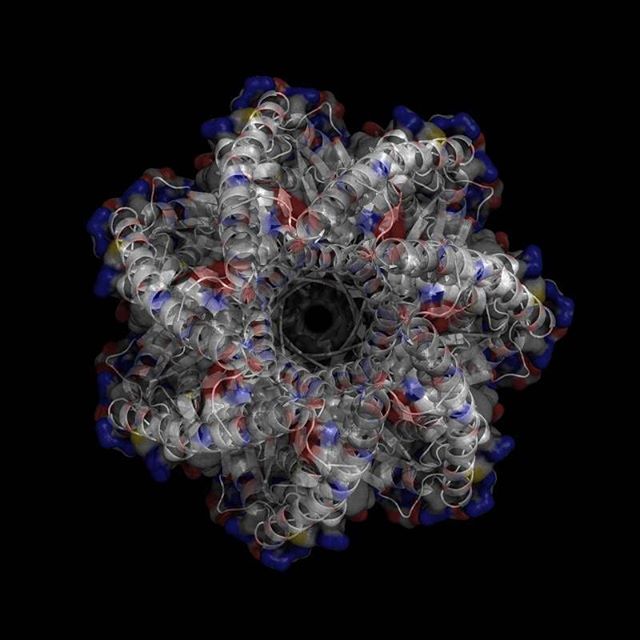 Mechanosensitive channels are a type of protein that allow us to hear, maintain balance, and feel touch. They can be found on the membrane (outer "shell") of cells and have evolved to respond to mechanical stress, such as swelling, shrinkage, or deformation of the cell. Mechanosensitive channels can change their shape when the cell is under stress and begin their function in order to prevent osmotic lysis or, in other words, stop the cell from bursting. Shown here is a mechanosensitive channel of small conductance (PDB: 6RLD) which releases solutes and water when a hypo-osmotic shock raises the pressure in the cell. 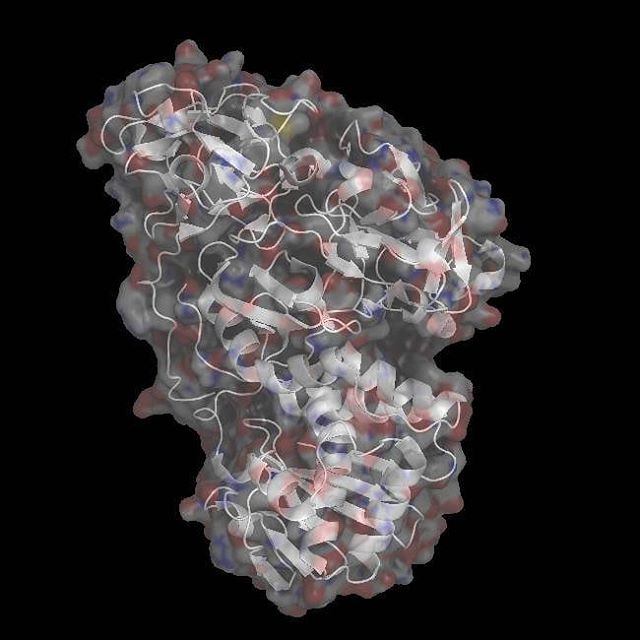 Abrus precatorius, better known as Rosary Pea or Jequirity Bean Plant, produces bright red, hard-shelled seeds. Ingestion of these seeds can be deadly due to the presence of abrin, a highly poisonous protein. Abrin is extremely toxic because it kills cells by inhibiting protein synthesis. The estimated human fatal dose is only 0.1-1ug/Kg and there is no antidote. Abrin (PDBID: 1ABR) consists of two chains (A and B) linked by a disulfide bond. Chain B binds to cell surface receptors, allowing abrin polypeptide to be transported inside the cell via receptor-mediated endocytosis. Inside the cell, chain A uses its glycosidase activity to modify the eukaryotic ribosomes, preventing its binding to elongation factor 2. This inhibits further protein modification during protein synthesis leading to cell death.