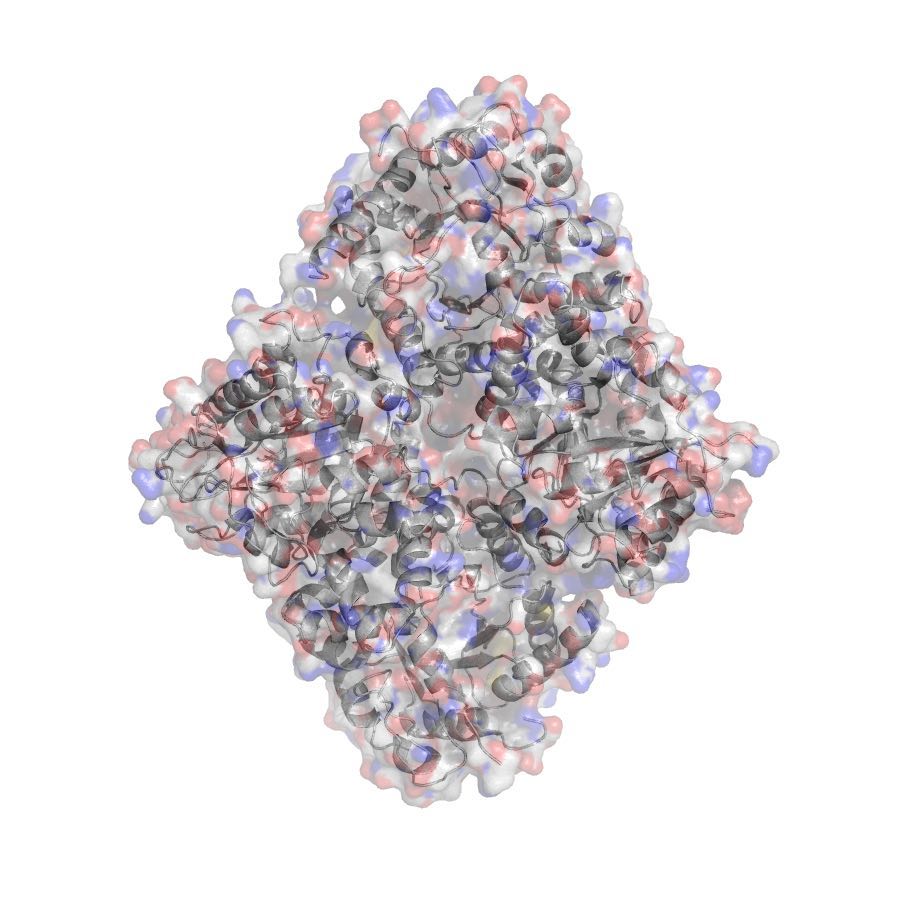 Lead poisoning can occur over long stretches of time as lead builds up in the body. Major lead contamination has occurred in the water of communities like Flint, Michigan, although other sources of lead contamination include lead-based paints or lead-contaminated dust in older buildings and soil. Delta-aminolevulinic acid dehydratase is an enzyme encoded by the ALAD gene which is important for biosynthesis of a precursor to heme, important for blood homeostasis. This enzyme becomes inhibited by the presence of lead, resulting in anemia and in some cases acute porphyria. 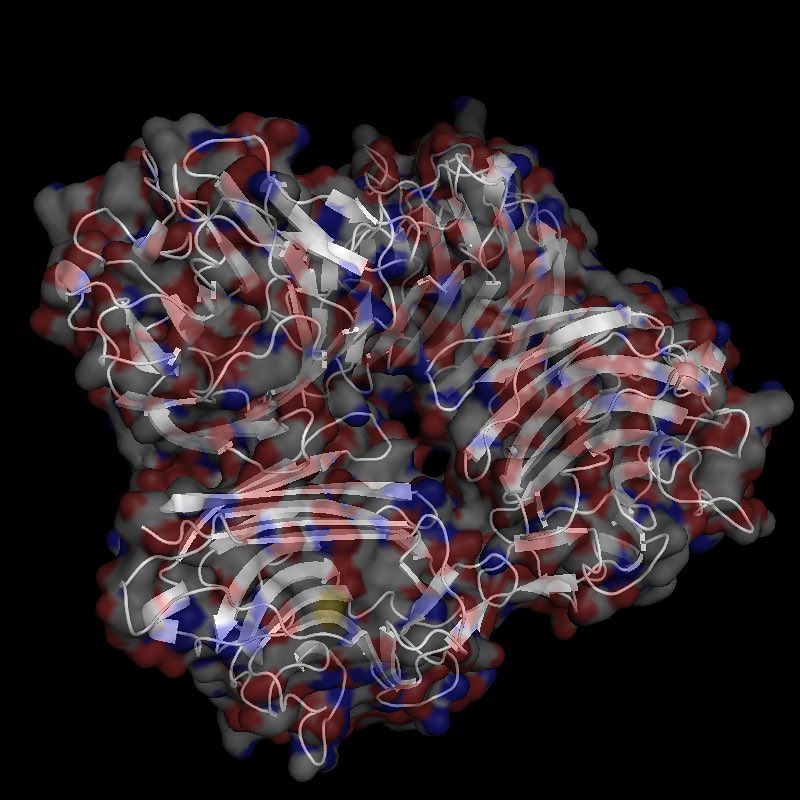 Peanut allergy is one of the most common causes of severe allergy attacks. Peanut allergy symptoms can be life-threatening (anaphylaxis). For some people with peanut allergy, even tiny amounts of peanuts can cause a serious reaction. Peanut lectin PNA and other legume lectins have been characterized as potential allergens for patients allergic to peanuts or other edible legume seeds. However, the clinical significance of the lectin-IgE interaction still has to be addressed. Shown here is the structure of peanut lectin-lactose complex. PDB: 2pel 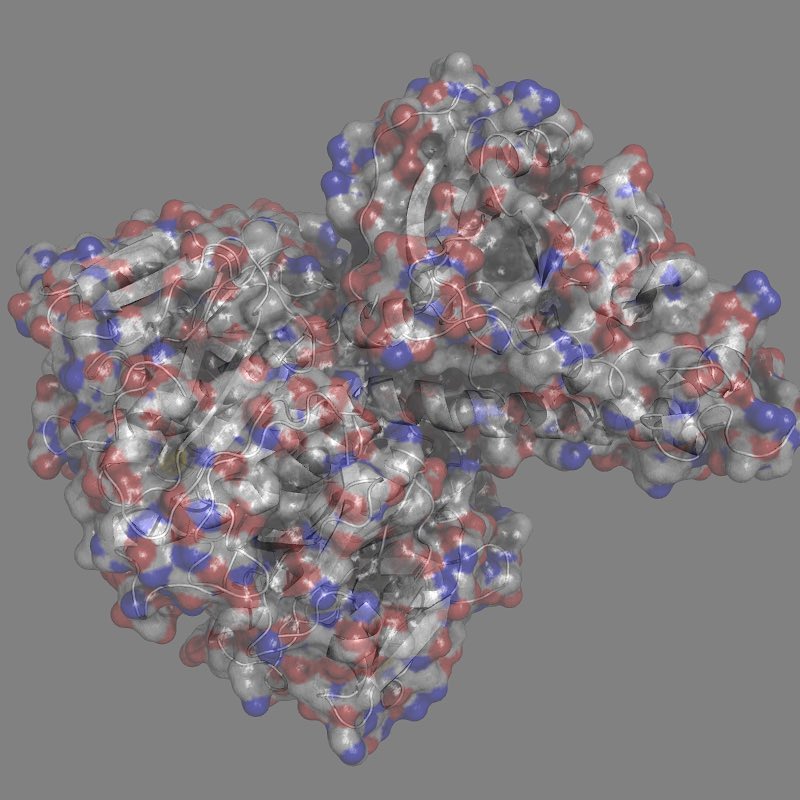 Cholera is an acute bacterial infection that causes severe diarrhea that can be deadly. Cholera toxin is the protein that causes the major symptoms of this infection. The protein is composed of two subunits that can cause chloride ions, sodium ions, potassium ions, and water to release into the intestine. This causes severe dehydration as the body sheds liters of fluid. 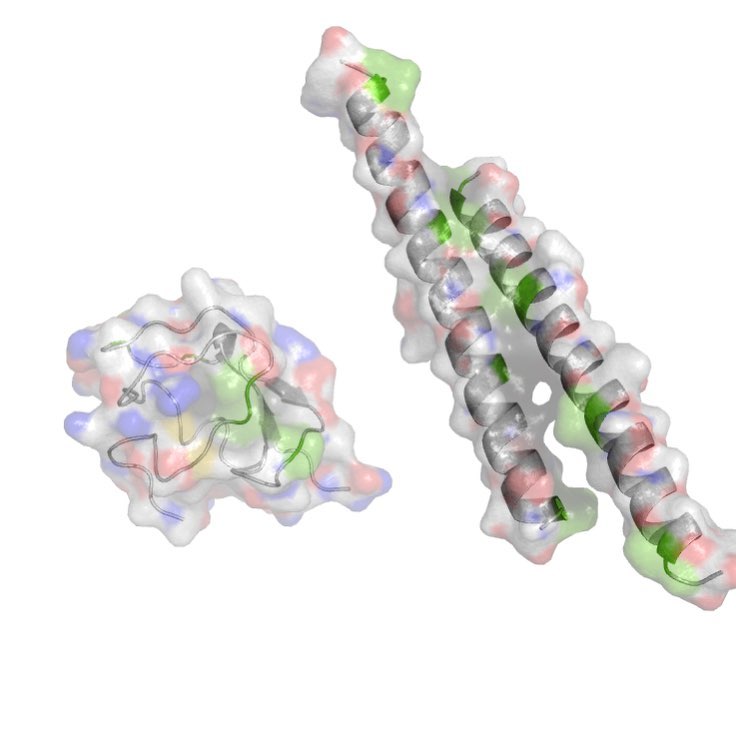 Antifreeze Proteins (AFP) are found in species from Polar habitats. They permit survival in subzero temperatures by forming hydrogen bonds with oxygens in developing ice crystals thereby stopping or retarding the growth of pyramidal planes and lowering the freeze point. This feat is accomplished via motifs of Thr residues. Their hydroxyl groups easily form the required bonds. AFP are also called ice-restructuring proteins due to this behavior. The large variety of species that use AFPs make them an excellent example of convergent evolution. Pictured below are two AFPs from separate fish species; ocean pout (pdb: 1kdf, left) and winter flounder (pdb: 1wfb, right). Threonine residues are highlighted in green to show the active faces of each protein. 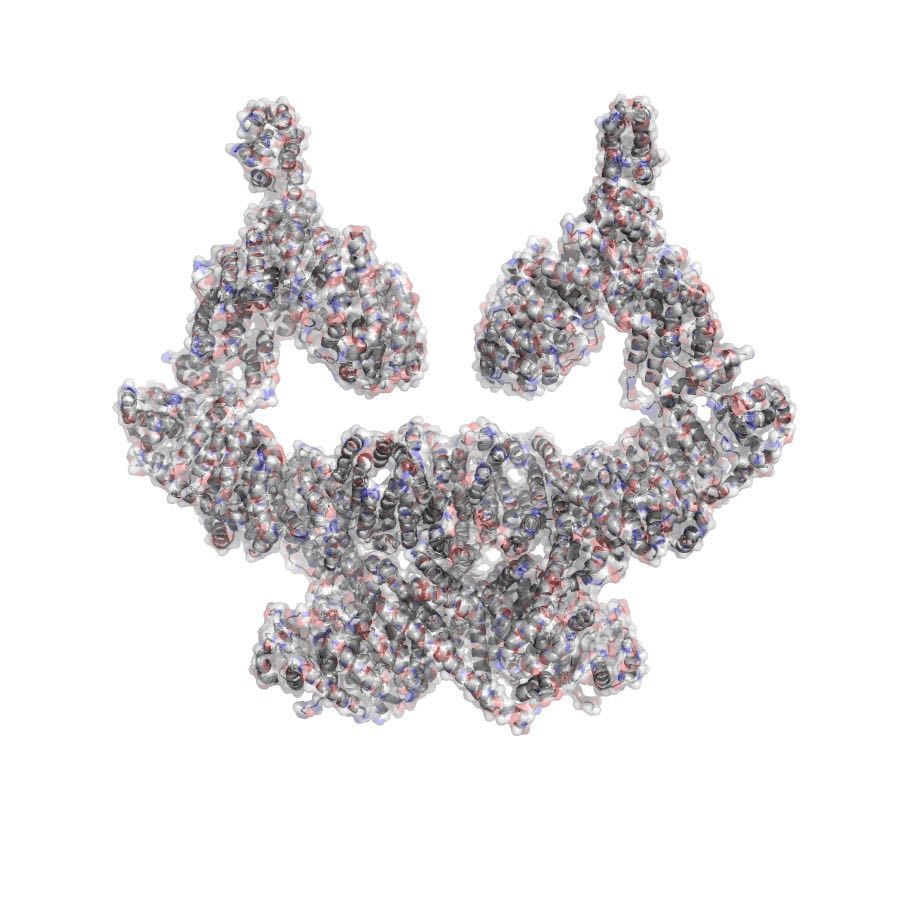 Our DNA can be damaged from a variety of sources including replication errors, UV rays, carcinogenic drugs, and many others. The most dangerous type of DNA break is when both strands of DNA are broken, called a double-strand break. In our cells, there is a sophisticated pathway that is in place to perform three key functions: 1. To detect damaged DNA 2. To recruit DNA repair proteins 3. To slow down the cell cycle and give more time for the DNA to be repaired. Shown here is ATM kinase, which is a critical signaling kinase responsible for repair of this type of DNA damage. 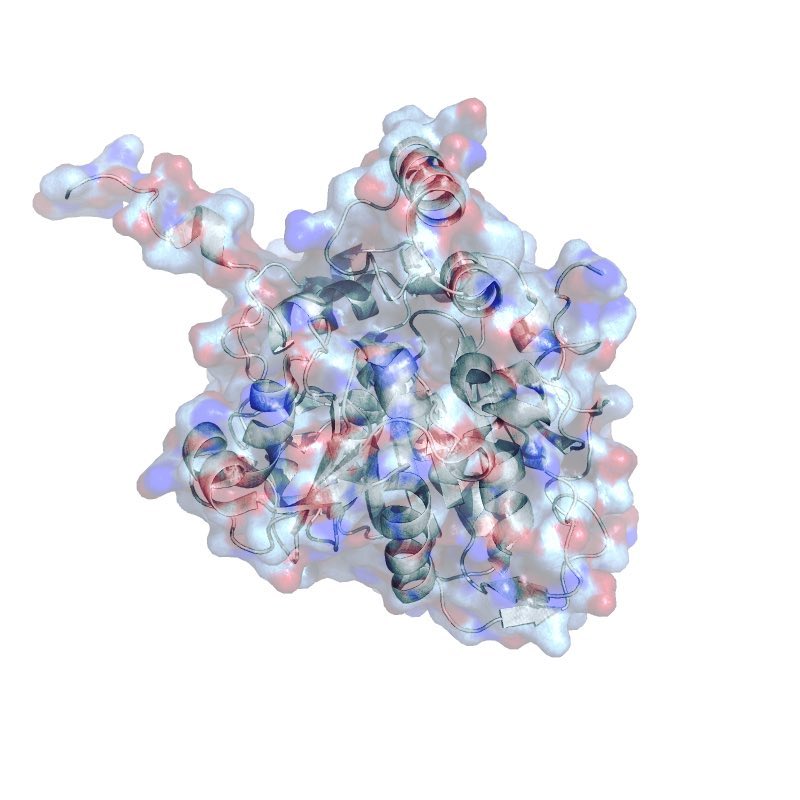 PhaC is an enzyme that can be used to engineer biodegradable plastics that are more ecologically friendly than their petroleum-based counterparts. Shown here is the catalytic domain from Cupriavidus necator. PDB: 5t6o 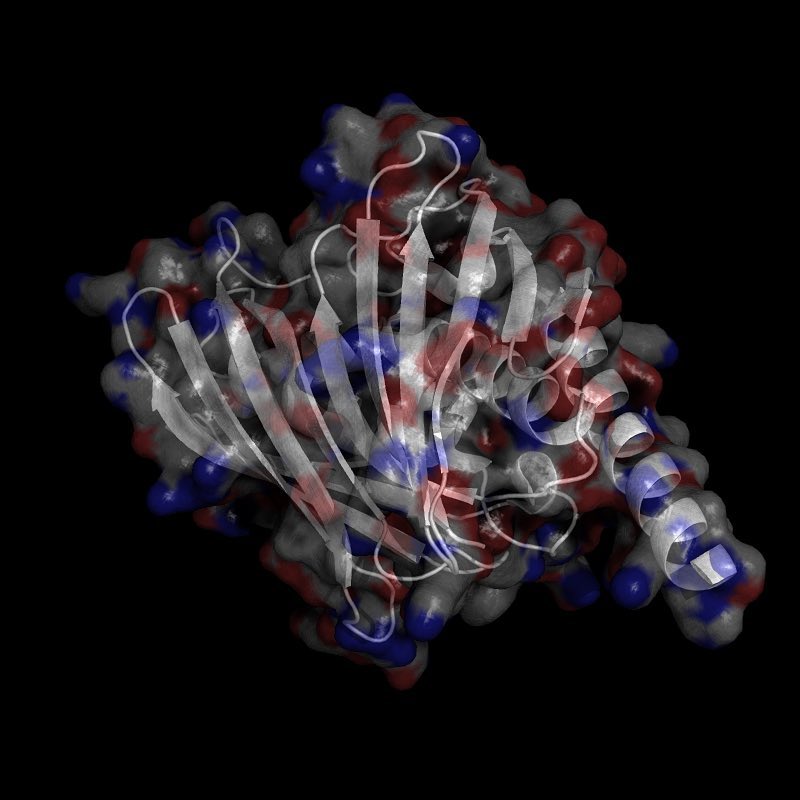 Escherichia coli (E. coli) bacteria normally live in the intestines of healthy people and animals. Most varieties of E. coli are harmless or cause relatively brief diarrhea. But a few particularly nasty strains, such as E. coli O157:H7, can cause severe abdominal cramps, bloody diarrhea and vomiting. You may be exposed to E. coli from contaminated water or food — especially raw vegetables and undercooked ground beef. 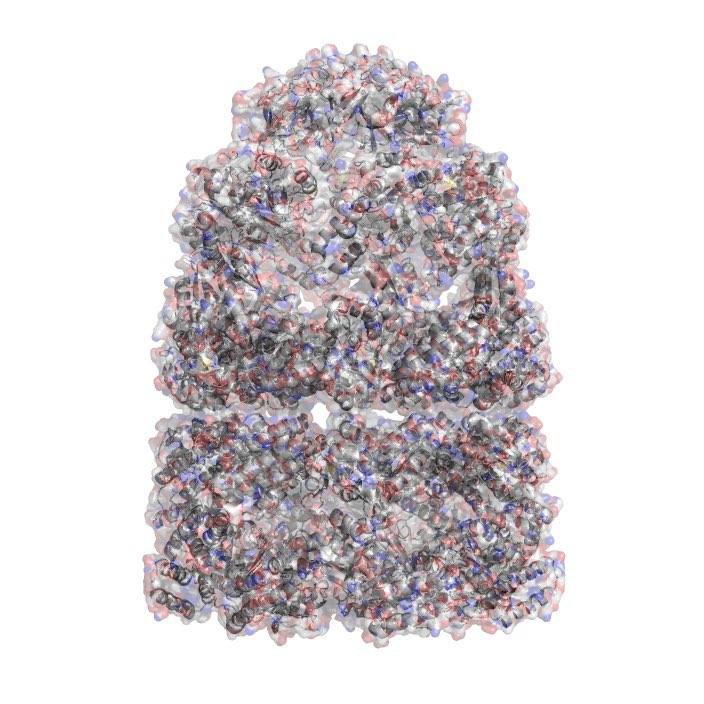 In biology, structure determines function. For proteins, this means that proper folding is everything! There is a complicated network of molecules called chaperones which help new proteins fold correctly as they form. One of the most impressive of these molecules is the GroEL/GroES complex. This complex consists of a large barrel made of 14 individual protein units (GroEL), capped by a seven-membered protein lid. When it is uncapped, the GroEL barrel is hydrophobic, and large enough to accommodate proteins up to 60 kilodaltons in size – for reference, the average eukaryotic protein is about ~50kDa in molecular weight, so GroEL can accommodate a wide variety of proteins, large and small. Proteins find their way into this barrel if they are misfolded such that their hydrophobic inside residues are pointed outward and can interact with the hydrophobic barrel walls. When the GroES lid caps GroEL, the misfolded protein is trapped inside, and the inside of the barrel turns hydrophilic. This change creates an isolated environment which favors proper folding and forces the misfolded protein to reorganize itself until its hydrophobic residues are on the inside where they belong! 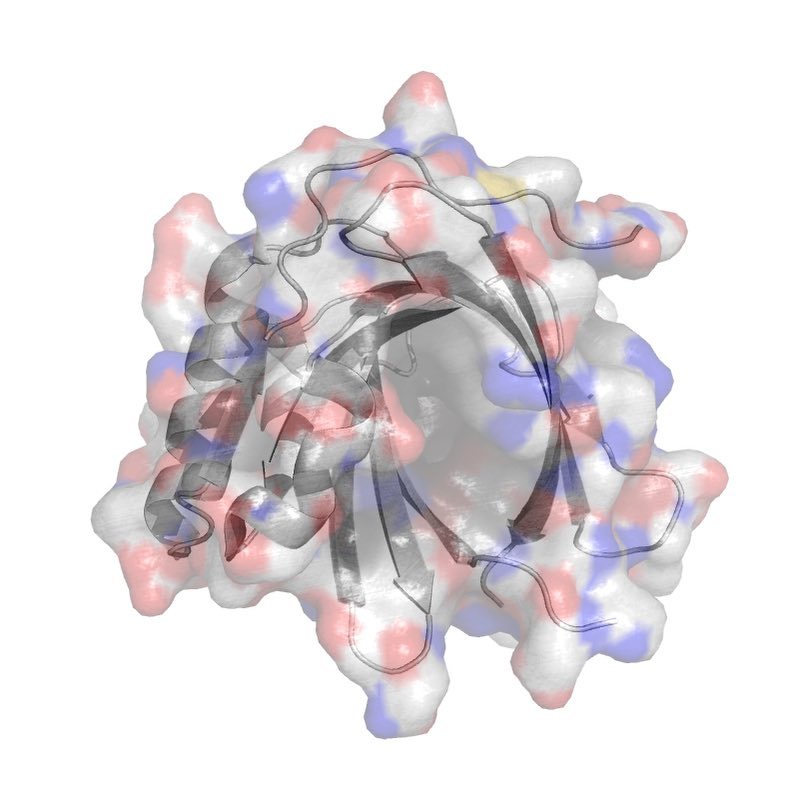 Apolipoproteins are lipid-binding proteins that serve to escort lipids through body and throughout the circulatory system. Atherosclerosis (hardening of the arteries) occurs when the artery wall suffers damage and becomes inflamed. Leukocytes respond to the inflammation and take up lipids (including those bound to apolipoproteins). These become fatty deposits called plaque. Understanding apolipoprotein function is critical to prevention of heart attack and stroke. 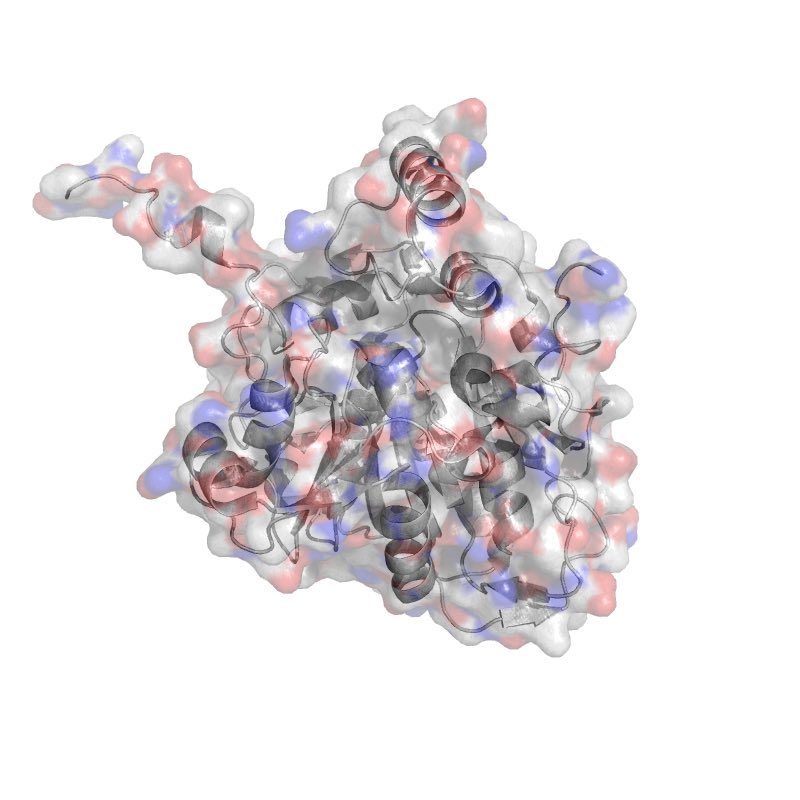 Plastics are usually made from petroleum-based materials, and there is a push to develop more environmentally friendly biodegradable plastics from natural organic compounds. Polyhydroxybutyrate synthase (PhaC) catalyzes the polymerization of a carbon-rich organic compound that is produced in bacteria, 3-(R)-hydroxybutyryl-coenzyme A. The result of this enzymatic reaction is a biodegradable polymer that can be used for eco-friendly plastics.